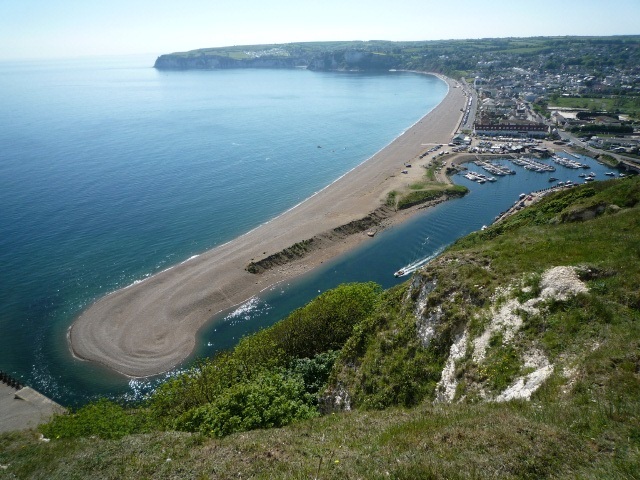 This is a small drying harbour situated at the mouth of the River Axe, formed behind a large protecting shingle bank. The harbour provides access to shallow draught yachts & craft at high water under settled conditions. The entrance is located beneath Haven Cliff and is open to the prevailing south westerlies. The harbour approach channel varies in direction due to the shifting shingle bar. The inner entrance is narrow (approx. 10m) and formed between the shingle spit to the west and a short stone / concrete / wooden piled pier to the east. Within the harbour a small yacht basin lies to the west and fisherman's quay to the east. There is a fixed bridge immediately upstream of the basin (1.5m headroom at MHW), the River Axe estuary extends some two miles inland and is navigable at high water by small craft. Moderate to strong onshore winds and any significant swell may render the entrance impassable. Such conditions produce dangerous overfalls on the bar and within the entrance channel, aggravated by the strength of the ebb tide.

The tidal streams run strongly in the entrance, especially during springs or when the river is in spate. The shingle bar is liable to frequent change, altering the direction of the entrance channel. Maintenance of the harbour entrance is totally dependent upon the water volume entering and leaving the estuary. This scouring effect, especially during the ebb flow helps clear shingle from the entrance. The effect is greatest during spring tides and less so during neaps. Similarly, the build-up of the shingle bar is more evident during neap tides due to the decreased flow, spring tides tend to scour the bar and widen the entrance channel.

Whilst every care has been taken in compiling these notes, the Axe Yacht Club accepts no responsibility for any errors, omissions, or for any incidents or mishaps which may arise from using them.

Each vessel will have its own capabilities and limitations, which need to be carefully considered in conjunction with these notes, to ensure safe navigation. A prudent navigator will have taken into account all prevailing conditions to assess the safe execution of his intended passage before proceeding to sea.

More detailed guidance for local harbour users is available HERE when logged in to the AYC website. 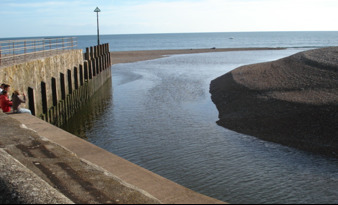 The above photo was taken under particularly favourable conditions; the entrance can be narrower

Approach - The approach should be made only in daylight and in settled conditions. The entrance can be dangerous in anything more than a moderate onshore wind without local knowledge. Due to the strength of the tidal streams in the entrance, entry should be made within half an hour either side of local high water, so as to gain slack water. The entrance is located beneath Haven Cliff at the eastern extremity of Seaton Bay. There are no offshore dangers in the approach other than the shingle bar. At low water the old pier head rocks uncover approximately 20 metres to the west of the entrance and the River Ledge rocks uncover 30 metres to the east. It is advised that prior inspection of the approaches is made at low water to confirm the position of the bar and navigability of the entrance channel.

Tidal streams off the entrance and the adjacent coastline are rectilinear and generally weak, attaining 1.5 knots during springs and one knot during neaps. The east going stream starts approximately four hours before HW Exmouth Dock, until two hours after, at which time it eases and turns to the west until two hours after local LW. Conversely the tidal streams in the entrance run strongly, requiring great caution.

Anchorage - In settled conditions it is possible to anchor due south of the AYC club house (white building with grey slate roof & white mast) in approximately 5m of water, with a sand bottom and reasonably good holding. Avoid the old pier head rocks between the anchorage and the entrance. A more sheltered anchorage can be found off the village of Beer, although remains open to the South and East. Due to poor holding and limited room, there is no anchorage within the harbour.

Approach & Entrance Channel - The entrance channel usually runs from the pier head in a SW'ly direction (but as stated is liable to change) with shingle drying each side extending approximately 75m. (LAT) seaward. The approximate line of approach is when the 'pillbox', situated beneath the cliff, is in transit with the pier head, providing a NE'ly heading. On making the approach due allowance should be made for the east going coastal tidal stream, setting a vessel to starboard at the time of local high water.

In the close approach to the pier head beacon avoid being set onto the wall, aim to keep mid channel between the wall and shingle spit.

Once inside the entrance there is a sharp turn to the west, following the line of the harbour wall. The AYC mooring basin with pontoons is situated just below the fixed bridge to port. Fishing vessels berth to starboard against the quay. The AYC landing pontoon is located to port immediately south of the bridge where a temporary berth can be found; but take care to avoid being swept onto the bridge. All berths in the harbour dry out.

Accommodation and Facilities -The Axe Yacht Club provides 102 pontoon berths, with a limit of 9.6m LOA and 1m draught, all vessels must be capable of drying out. Visitor's berths are available upon application to the AYC Bosun. The mooring basin is generally well sheltered, there being little swell entering the harbour; except on occasions with heavy weather around the HW period.

The Axe Yacht Club HQ lies within the harbour compound and serves both yachts and dinghies. It is open at weekends, and most weekdays in the season, providing showers and usual facilities. Slipping (hoist) and drying-out can be arranged on the Club's main slipway adjacent to the landing pontoon.

Store, Fuel, Repairs - Water can be obtained from the Yacht Club. Fuel & stores can be obtained from the local super market in Seaton (half a mile distant). Local chandlery is available in Beer. Two local hostelries exist in the village of Axmouth and a mixture of facilities in Seaton. Repairs can be carried out by the local boat builder, H.J.Mears; situated just above the bridge (clearance l.5m MHW). The estuary can be navigated some two miles inland by shallow draught vessels at HW. 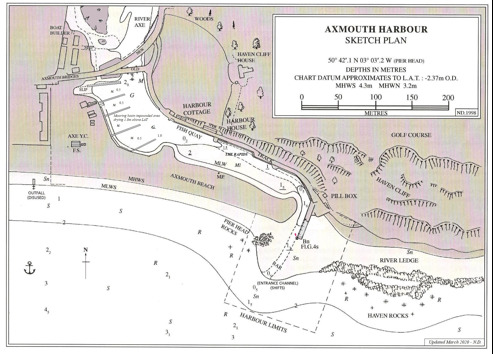